GadgetGets is supported by its audience. When you purchase through links on our site, we may earn an affiliate commission. Learn more

Have you ever visited a foreign country and wished you had a language translator with you? With Pocketalk, a two-way voice translator device, you can travel

Have you ever visited a foreign country and wished you had a language translator with you? With Pocketalk, a two-way voice translator device, you can travel to over 100 countries around the world and communicate with confidence. Using cloud-based translation engines, Pocketalk offers the most up-to-date and accurate translations. This smart device continues to learn as you use it. Whether you’re traveling through Asia or backpacking through Europe, Pocketalk is your ultimate travel companion. Created for conversations, Pocketalk allows you to speak in your native language, handling up to 30 seconds of speaking per translation, so you get to speak in sentences rather than short statements. Just choose the language you will be speaking in, the language you need to translate to, and hold down a button to talk. Our multi-language translator supports up to 82 languages including Arabic, Chinese, English, French, German, Hindi, Italian, Japanese, Korean, Polish, Portuguese, Russian, Spanish, Thai, Turkish, Vietnamese, and many more. No matter where you travel, rely on Pocketalk to break down language barriers.Instead of signing up for an expensive mobile carrier plan or hunting down a wireless hotspot, Pocketalk comes with built-in data, meaning no wifi is needed in order to use it. Additionally, our device is designed with portability in mind. While Pocketalk is small enough to fit in your pocket, its capabilities are unmatched. Equipped with Bluetooth compatibilities, powerful dual speakers and noise-cancelling dual microphones, Pocketalk will pick up every word you speak, even in the busiest of cities or crowded cafes. The large touch-screen makes Pocketalk simple to use and offers users a speech to text display of conversations. Its simple and intuitive interface, adjusting the volume, brightness, and settings is just a few taps away. With a full seven hours of usage or up to ten days in sleep mode, Pocketalk has a long reliable battery life. 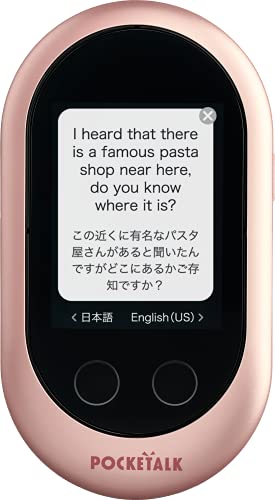